Most frequently used for these scenarios: 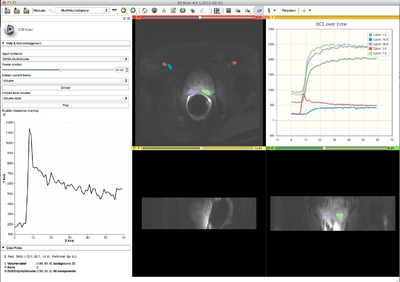 Screenshot of charts derived from the sample data set. The curves represent average signal intensity in the ROI's with corresponding colors, which were drawn in the editor. Please note the arterial input function in red.

MultiVolume data is represented in this module using two components:

Before multivolume data can be viewed/explored, it has to be loaded using MultVolumeImporter module.

This module is an external Slicer module. The source code is available on Github here: https://github.com/fedorov/MultiVolumeExplorer

Known issues that won't be resolved

Features to be implemented