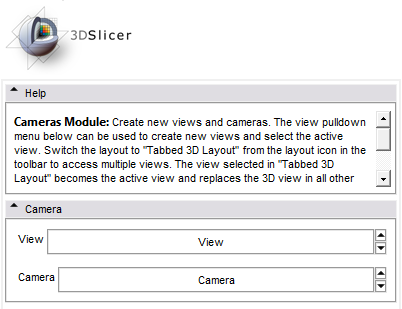 Only one camera is used by a view at a time. When a view is selected from the pull-down, the camera it is currently using is automatically selected in the second pull-down.

Here are a few pointers related to the new framework. What happens under the hood, and what events developers and module maintainers can intercept to use the new features.

When a vtkMRMLViewNode is created and added to the MRML scene (say by a module, or by the main app, or a third party):

In a similar fashion, vtkSlicerApplicationGUI listens to vtkMRMLScene::NodeRemovedEvent, calls vtkSlicerApplicationGUI::OnViewNodeRemoved, which remove previous observers, and calls UpdateMain3DViewers() as well. This function still does what is described above, but also loops over all the vtkSlicerViewerWidget it knows: if the corresponding vtkMRMLViewNode doesn't exist anymore (since it was just removed), it deletes that viewer widget, which should free the corresponding graphic resources.

Module maintainers should not have to worry about the creation of Slicer Viewer Widgets, as this is taken care of as described above. What a module should do:

What is said in that first bullet point is not exactly helping though: vtkMRMLScene::NodeAddedEvent is triggered when a vtkMRMLViewNode is added, but it is still too early for your module to add resources to that view (i.e. the renderers), because the corresponding vtkSlicerViewerWidget has not been created; this is done in UpdateMain3DViewers(). So even though you may want to listen to NodeAddedEvent to prepare some resources, you still can't add them, no renderers are ready for your actors. What you need is a way to know that the corresponding SlicerViewerWidget has been created. To fix that situation, your module should ultimately:

Note that this doesn't necessarily conflict with the idea that a viewer widget, as Jim Miller suggested, could keep track of what is visible or not in its own render window... I guess for the time being we could let the modules automatically add their actors to each new view when they are added to the scene, as described above, and then later on we can come up with something to turn the visibility on/off of actors in each viewer...

Now of course the choice of allocating resources *per view* depends on the module. One can technically add the same actor to different renderers, but this doesn't always do the trick (especially not for volume rendering). For example, fiducials use vtkFollower actors to make sure labels always face the camera. Since the camera is different for each renderer, this resource will have to be allocated for *each view*. It's likely up to the module to maintain some sort of STL map associating a view to the resources for that view.

This work is part of the National Alliance for Medical Image Computing (NAMIC), funded by the National Institutes of Health through the NIH Roadmap for Medical Research, Grant U54 EB005149.
The Cameras module was contributed by Sebastien Barre, Kitware Inc.

All modules that display an actor on screen are technically concerned and need to be revisited to use the new framework. Now that the multi camera/views logic is in the core, it's a matter of letting the module maintainers know that they can upgrade their code to use this particular set of functionality (which didn't exist when modules like Fiducials, Volume Rendering, etc were first developed).

Modules that need to be upgraded (please keep updating this list):