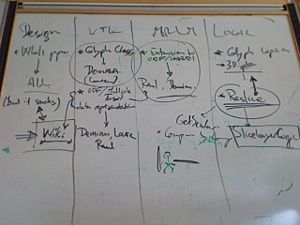 As part of this redesign, the handling of IDs to the display node and storage node have been revamped to keep consistency. vtkMRMLVolumeNode is the class that keeps the DisplayNodeID and the subclassess take care of downcasting the node corresponding to that ID to make sure that the DisplayNode is the right one corresponding to the specific VolumeNode

There is not much we can do about dimensionality. However we can define a convention to be able to store point data attributes beyond the previously commented using new vtkDataArrays in the vtkFieldData. Then, our work now is to define a clear convention that allow us to make an unequivocal connection between the vtkDataArray an the representation associated to it.

Glyphs is a common way to represent complex diffusion data that encodes information about the multiple orientation nature of the water diffusion in the brain. Glyphs are polygonal elements that can be associated to every location in the image grid.