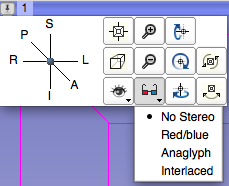 The final mode, called ActiveStereo or CrystalEyes mode, requires special display hardware and is not enabled by default. You have to start Slicer from command line and use the --stereo flag when using the ActiveStereo mode. ActiveStereo mode is currently under development.

For this stereo mode to work it is necessary to start Slicer4 from the command line and using the --stereo option (i.e. open a shell, cd into the folder containing the slicer executable and type ./Slicer --stereo). This is only required for CrystalEyes mode. This option instructs 3D Slicer to configure a window using OpenGL Quad-buffered stereo. If you have troubles with this mode, be sure you are using current drivers for the GPU .