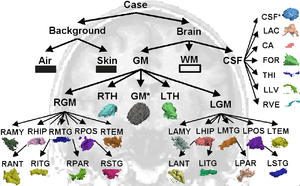 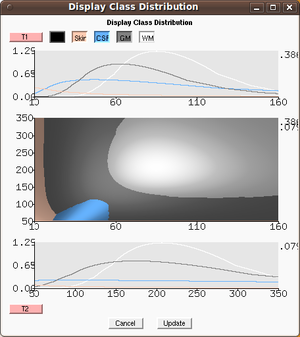 Refining the intensity distribution for each structure of interest is often a critical step in the parameterization of the segmentation algorithm. The panel includes an overview window that shows the distribution in a 1D and 2D graph (press "Plot Distributions" to view the graph). By placing the mouse cursor in the 2D viewers the corresponding intensity value is shown in the graph.

The overall design of the EMSegment module is described in the AHM2008 slides.

The module is implemented as a programmatic Slicer3 module because it requires a large degree of interaction with the user, the data stored in the MRML tree, and the Slicer3 GUI itself. Because the MRML node structure is rather complicated (for example the anatomical tissue hierarchy and a large number of interdependent nodes) the Logic class is solely responsible for maintaining and accessing these nodes. The Logic class provides an API that the GUI code uses to access and modify data. The Logic class also wraps the algorithm code itself.

Notes from the Developer(s)

On the Dashboard, these tests verify that the module is working on various platforms:

Follow this link to the Slicer3 bug tracker. Please select the usability issue category when browsing or contributing.

Links for the module.

We thank Andriy Fedorov and Alexander Zaitsev for pointing to and fixing issues in the early development. Funding for the EMSegment module was provided by NA-MIC and NAC (PI: Ron Kikinis).