This work was sponsored in part by the collaboration between NA-MIC and NITRC. 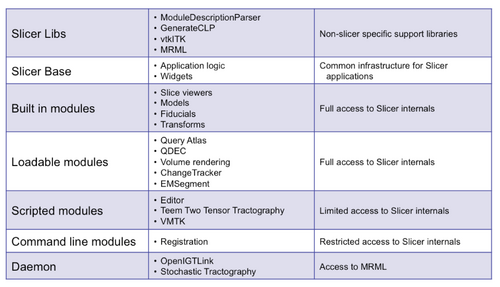 The following types of modules are available:

All three module types are dynamically discovered by slicer at run time.

For generic module templates, see the examples on nitrc.org. For a fully fleshed out working example, see the Vascular Modeling Toolkit (vtmk) project which includes a loadable module of vtk/itk code along with several python scripted modules that implement the kwwidgets-based user interface.

Please refer to the status page for extensions for slicer version 3.6. 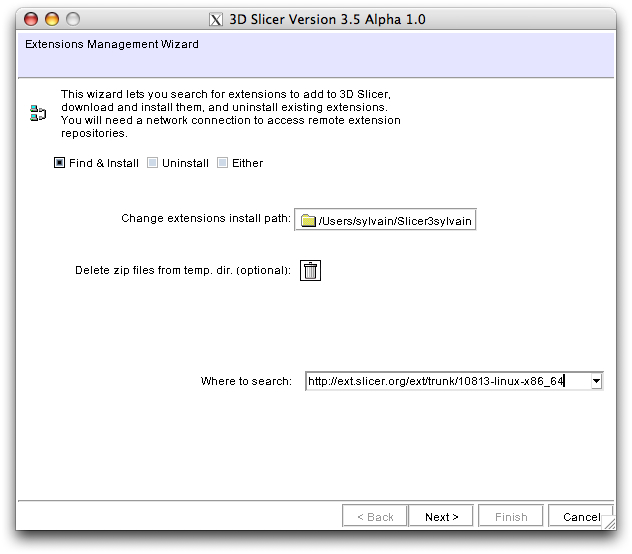 Development in the slicer3 trunk through early August 2009 has led to a version that works well and is being migrated to the 3.4 release branch for use in patch version 3.4.1. Fixes from the following files are being migrated:

Extensions must follow the appropriate architecture and must meet minimum documentation requirements for them to be made available to end users. See Slicer3:Loadable_Modules for an example of how to make GUI and GUI-less Loadable Modules. Command Line and Scripted Modules will also work with this framework.

You can choose the version of your code that you want to make available to end users by having the Subversion repository URL in the s3ext script point to either the trunk of your code base or to a stable branch.

Once your code compiles successfully on all of the standard platforms (win32, OsX, linux 32 and linux 64) you can choose to talk to Katie Hayes to make your extension available through the extension wizard in Slicer3.

To enable your Command Line, Scripted, or Loadable module, add an "s3ext" script to the Slicer3/Extensions directory of the Slicer3 source repository.

The source code manager parameter in the .s3ext file will point to a repository where a top level CMakeLists.txt file is checked out as well as your source code. The CMakeLists.txt file can use External_Project CMake command to check out additional code from other repositories if necessary. As you're developing your extension module, you can build it by running the extend.tcl script:

On Windows, make sure that you set the project name in the top level CMakeLists.txt file to MyModule as otherwise extend.tcl will not find the MyModule.sln file to build.

The extend script will create

and check out your code into that directory. It will then delete any old versions of these directories and create them fresh:

At the top level you can use ${CMAKE_CURRENT_BINARY_DIR} or ${MyModule_BINARY_DIR} to refer to the MyModule-build directory and ${CMAKE_INSTALL_PREFIX} to refer to the MyModule-install/lib/Slicer3 directory during the install step. Files placed in the ${CMAKE_INSTALL_PREFIX} directory will be zipped up by the extend.tcl script and uploaded to the extension server under the current svn revision number of Slicer3.

Test inegration of your extension by downloading and installing your module from the extension server. The archive will be expanded in the designated extensions installation directory, so it must contain everything needed to run your module.

For testing a command line module, at a minimum use the CMake command add_test to test the --xml argument:

Run the test with the following: