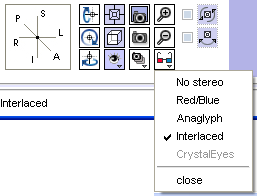 Slicer has the capability to display data in the 3D Viewer stereoscopically in a number of fashions including Red/Blue, Anaglyphic, Interlaced.

You have to start Slicer from command line and use the --stereo flag when using the CrystallEyes mode.

Invoking Slicer3 from the command line and using the --stereo option is only required for CrystalEyes mode. This option instructs 3D Slicer to configure a window using OpenGL Quad-buffered stereo. If you have troubles with this mode, be sure you are using current drivers for the GPU .