A number of things have come together to allow the new prototype editor module:

A few limitations make this still a 'prototype' including:

Type Control-T to bring up interactor, then

This test does things the right way in that it creates model nodes for the slices and the updates of the planes is triggered by observers on the Slice Logic. But it does things the wrong way in that it creates the texture in an ad hoc way for now since we don't yet have a clean way to specify textures in the model display nodes. Also, the Viewer renders on every changes to the slice view, so as you pan/zoom/scroll the slices the redraws are jerky. Next step is to figure out how best to get this functionality integrated into the C++. Probably there should be a vtkSlicerSliceModelsLogic class that's managed by the vtkSlicerSliceGUI. 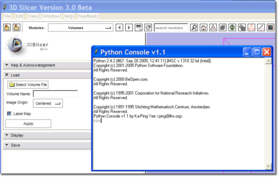 Bringing up the Python console

Now, do something interesting with it! 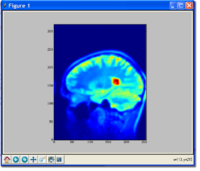