Difference between revisions of "Slicer3:Solaris" 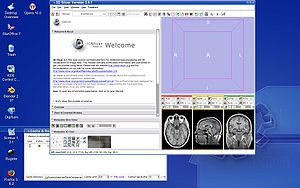 At present (as of August 2010) the build of Slicer3 is only supported on Opensolaris (or on SXCE, but that is discontinued).

On Solaris 10 the build will likely fail, as Slicer3's build process involves the building of Python 2.6, and that needs a newer version of libcrypto (>0.9.7) that is not included with the OS. According to Oracle there won't be a newer version either, but they going to patch the current release (see the link bellow). This is good for security, but bad for missing symbols.

Oracle Studio is used to compile Slicer3 on Solaris. Both Studio 12.1 and Studio Express have some bugs that make the compilation harder, but the bugs have been reported and being worked on.

The build system uses the Apache Standard C++ Library on Solaris, which is available for SXCE and Opensolaris out of the box (package names: SUNWlibstdcxx4 and library/c++/stdcxx). This library is available for Solaris 10 as a contributed download; you can find it in the Links section.

There have been reports that running Slicer3 under Solaris 10 is possible with a recent Xorg, Python and Apache Standard C++ Library versions.

Put it in the drive, or mount the iso via lofi, and browse to the Solaris_11/Product directory, and

cvs or svn may complain for a newer versions. In this case it is recommended that you download and install the CBE tools from opensolaris.org (link below).

On OpenSolaris you can use the IPS system to add missing packages. The names for the needed packages can be found in the "Links" section below.

Installation of the Apache Standard C++ Library might be necessary to run the software. You might have to install SUNWlibstdcxx4 OR library/c++/stdcxx or ask your sysadmin to do that for you.