There are several methods to determine the SNR of MR images suggested in the NEMA standard and the literature. The most commonly used method among the studies on MRI-compatible robotics is a single image method, where SNR is measured based on two regions of interest (ROIs) on a single image assuming the statistically and spatially uniform distribution of noise [1][2][3]. Usually, one ROI is defined in the tissue of interest, and the other is in the image background i.e. air. Although the method takes a practical approach requiring only a single image, it is known that the method does not yield accurate SNR measurement in a phased-array surface coil system and/or sum-of-square reconstruction due to the spatial and statistical variation of noise. Alternatively, one can measure SNR without assuming the statistically and spatially uniform distribution of noise with the following methods. The first method is to measure pixel-by-pixel SNR through the repeated acquisition [4][5][6][7]. Because the method relies less on the assumption of statistical and spatial noise distribution than any other methods, it is often used as the gold standard SNR measurement. A drawback of this method, however, is that it requires a large number of image acquisitions, typically a few hundred, making it difficult to be used with a slow imaging sequence. The second method is the "noise only image" method [NEMA-2008, Constantinides-1997, Kellman-2005]. The method calculates SNR based on a single or multiple "noise only images", which are acquired without radiofrequency (RF) excitation. The "noise only image" method was further generalized by Kellman and McVeigh, where images are reconstructed in "SNR units" based on noise only images allowing direct pixel-by-pixel SNR measurement [Kellman-2005]. A disadvantage of the "noise only image" method is that most of clinical MRI system does not allow acquiring noise only images with standard pulse sequence. The third method is the "difference image" method, where noise is estimated by calculating a pixel-by-pixel difference between two images acquired under exactly the same conditions [3][8][9]. Despite several drawbacks e.g. requirement for stationary tissue and limited precision due to small sample size, the method allows measuring local SNR with a standard clinical sequence. The SNRMeasurement module calculates the SNR of MR images using the "difference image" method. 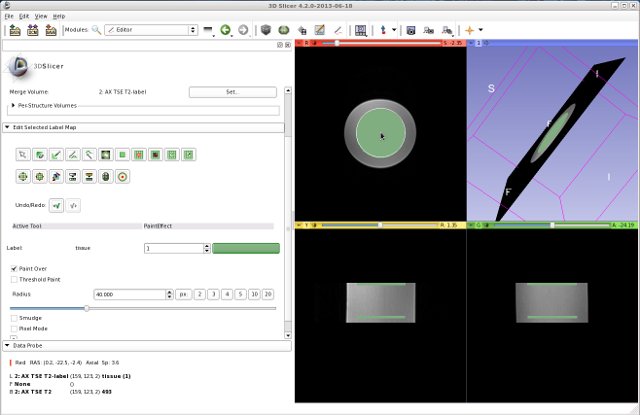