Difference between revisions of "Documentation/4.3/Extensions/OpenCAD" 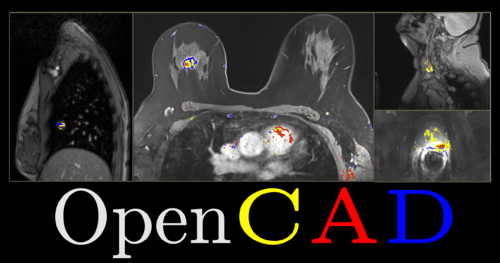 OpenCAD module allows to output a filtered transform node based on an tracker input (transform node). Tracking sensors are particularly usefull to track surgical tools, robots, patient motion, etc... . However, data imported in 3D Slicer from these devices are often noisy. To reduce the noise and smoothly control objects, such as 3D Slicer camera, the OpenCAD module will apply a low-pass filter on input data. The cut-off frequency (i.e. the smoothing parameter) is adjustable by the user. It is important to notice that filters induce delay, and the smoother the motion is, the bigger the delay between the raw data and the filtered position will be.

The OpenCAD module could be used in any situation requiring stable tracking data and not requiring a "real-time" information. Indeed, applying a filter on raw data will induce a delay (depending on choosen parameters) on the filtered position/orientation. An example could be to drive Slicer's virtual camera. Having some noise on the transformation driving the camera will cause the camera to "shake" which could be really distracting and uncomfortable to look at. By filtering this raw data, camera motion is smoothed.

The GUI of the OpenCAD module contains 4 elements:

This module is for now only a low-pass filter, but in the futur, several filters would be implemented to let the choice to the user.