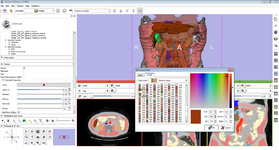 Slicer with Qt only
Browse the image gallery

3D Slicer is a free open source extensible software application for medical image computing and visualization. Mainly written in C++ and based on the NA-MIC kit, 3D Slicer relies on a variety of libraries: VTK, ITK, CTK, CMake, Qt and Python.

To ensure the stability of the application, relying on a robust software process, the source code is compiled and tested on a daily basis on a variety of platform configurations. The testing results are summarized and reported using a web-based centralized CDash dashboard. Developers of 3D Slicer can also report issues on the open mailing list or using the web-based bug tracking system.

3D Slicer consists of both a lean application core and modules offering specific functionality. The core implements the user interface, provides support for data input/output (IO) and visualization and also exposes developer interfaces that support extension of the application with new modules.

Multiple types of modules are supported: CLI, Loadable module, Scripted module and Editor effect. While the developer has to choose between one of these types to implement its module, the end user won't notice the difference as they all share the same look & feel. The choice for a given type of module is usually based on the type of inputs/parameters for a given module.

These modules can be either built-in or installed on demand via the extensions manager.

Typically, a development project will begin with a prototype functionality. Depending on the nature of the algorithm, you might consider implementing it as a ITK function, and submit to the Insight journal. An alternate infrastructure for adding new functionality is through programming in Python. By turning this functionality into a CLI plug-in, it becomes possible to use Slicer as a platform for the functionality. Slicer will provide I/O and visualization capabilities, you will provide the new algorithm. Finally, Slicer has infrastructure and support for sharing the functionality with your friends and the world. We call them Extensions. There is a process which will allow you to add your extension to the Slicer extension catalog.

Develop a module and create an extension

The following instructions describes the recommended workflow to contribute patch to Slicer code base.

It is also assumed you followed the New community member checklist and have a clone of https://github.com/Slicer/Slicer/.

If not already done, make sure to read the Slicer Coding Style Guide :-)