The following figure illustrates the three spaces and their corresponding axes:

Each coordinate system serves one purpose and represents their data in different ways.

From these planes it follows that all axes have their notation in a positive direction (e.g. the negative Superior axis is represented by the Inferior axis).

The anatomical coordinate system is a continuous three-dimensional space in which an image has been sampled. In neuroimaging, it is common to define this space with respect to the human whose brain is being scanned. Hence the 3D basis is defined along the anatomical axes of anterior-posterior, inferior-superior, and left-right.

However different medical applications use different definitions of this 3D basis. Most common are the following bases:

Both bases are equally useful and logical. It is just necessary to know to which basis an image is referenced.

The image coordinate system describes how an image was acquired with respect to the anatomy. Medical scanners create regular, rectangular arrays of points and cells which start at the upper left corner. The i axis increases to the right, the j axis to the bottom and the k axis backwards.

In addition to the intensity value of each voxel (i j k) the origin and spacing of the anatomical coordinates are stored too.

The following 2D example shows the meaning of origin and spacing: 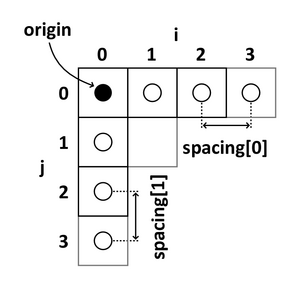 Using the origin and spacing, the corresponding position of each (image coordinate) voxel in anatomical coordinates can be calculated.

The transformation matrix [math]A[/math] is a [math]3\,\times\,3[/math] matrix and carries all information about space directions and axis scaling.

[math]\vec{t}[/math] is a [math]3\,\times\,1[/math] vector and contains information about the geometric position of the first voxel.

The last equation shows that the linear transformation is performed by a matrix multiplication and the translation by a vector addition. To represent both, the transformation and the translation, by a matrix multiplication an augmented matrix must be used. This technique requires that the matrix [math]A[/math] is augmented with an extra row of zeros at the bottom, an extra column-the translation vector-to the right, and a '1' in the lower right corner. Additionally all vectors have to be written as homogeneous coordinates, which means that a '1' is augmented at the end.

Depending on the used anatomical space (LPS or RAS) the [math]4\,\times\,4[/math] matrix is called IJKtoLPS- or IJKtoRAS-matrix, because it represents the transformation from IJK to LPS or RAS.

2D example or calculating an IJtoLS-matrix

TODO: Add the example of the session