After a conversation with Gordon Kindlmann, I (Steve Pieper) decided to try an experiment...

Can python be used to tie non-VTK-aware OpenGL C++ code into VTK? 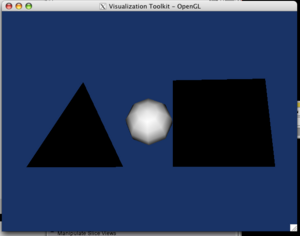 I checked in some code to make this possible. The C++ class, vtkOpenGLScriptedActor, allows you to specify a script that should be executed inside the VTK render process. This calls out to python, where arbitrary code can be run (something like a callback).

The example script shows how to draw some simple OpenGL shapes in the same window with a VTK managed sphere. The example relies on having PyOpenGL installed in Slicer's python.

The result is shown in the image to the right.

The excerpt of code below shows how the actor is instanced and used.

Making individual vertex calls through python is not advised for efficiency, however that doesn't mean this is simply a demo. In particular, there are some ways this could be applied: